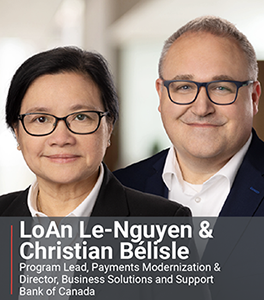 The introduction of ISO 20022 to the Lynx system as part of Release Two will set the foundation for payment innovation to take place in Canada over the coming years. Christian Bélisle, Director, Business Solutions and Support, and LoAn Le-Nguyen, Program Lead, Payments Modernization, share what they’re doing to support the implementation of Lynx Release Two and what this change means for the Bank of Canada.

Disclaimer: the views and opinions expressed in this article are those of the authors and do not necessarily reflect or represent those from the Bank of Canada.

How is Bank of Canada preparing for the second release of Lynx?

For us, the second release of Lynx is quite different from the first one. While the first release mainly impacted our central banking functions, i.e., collateral management, handling of participants’ end-of-day balances, major updates to various legal agreements and revamping our contingencies – our work related to the second release brought us closer to the work being done by all Lynx participants, and mainly focuses on the adoption of the new MX payment messages.

Although the Canadian payment industry (and the rest of the world) has been talking about the adoption of ISO 20022 for several years now, we were all learning the details and specificities of the message format at the same time. With the MT messages (the message format used by Lynx today, and previously by the Large Value Transfer System), we always had access to our internal experts. However, there was no equivalent expertise for the MX messages. The industry was learning at the same time, reinforcing the need for collaboration.

To prepare for this initiative, our planning had to start early. The architecture decisions and foundational design occurred while implementing Lynx Release One. From the beginning, we focused on meeting two objectives; the first being receiving and processing payment messages to meet Lynx Release Two and secondly, setting a strong foundation for the adoption of ISO 20022.

What does the introduction of ISO 20022 to the Lynx system mean to your organization?

The introduction of ISO 20022 to Lynx will enhance business-to-business payments, interoperability, and faster funds transfers for end-users, both domestically and across borders.

Our offering of banking services is quite limited and targets specific clients. These include the provision of bank accounts, securities accounts, and safekeeping services, Canadian-dollar payments, settlement services to payment clearing and settlement systems, and fully collateralized loans. When eligible, we provide some (or all) of these services to clients, including the Government of Canada, financial market infrastructures, Canadian financial institutions, foreign central banks and official international financial organizations, and two Crown corporations.

Our operations are typically related to monetary policy and result in the sale and purchase of securities in CDSX, Canada’s central securities depository and securities settlement system. Our own payment business is quite limited as we only send or receive a few payments where we are either the debtor or creditor. We do expect to transition our own payments to MX over time.

By embedding more meaningful remittance information to each payment, the introduction of ISO 20022 in Canada brings a lot of power for the pre- and post-payment activities, supporting consumers, businesses, and governments in simplifying their reconciliation processes. Over time, as clients upgrade their systems and processes to fully leverage the remittance information now available in their payments and statements, banks will take an even more central role in passing the ISO 20022 value-added information. Payments suddenly become explicitly linked to the exchange of funds for specific goods and services.

Another key benefit to highlight, more at the Lynx participants level, will also be the ability to map the priority of their payments from their internal payment engines, allowing them to even better leverage the various netting and queuing algorithms offered in Lynx, resulting in even greater collateral efficiencies. While this was possible in the first release of Lynx, it had to be managed manually by participants, and within the Lynx application, at the individual payment level.

How is the introduction of ISO 20022 to the Lynx system helping to set the foundation for payment innovation in Canada over the coming years?

As we mentioned, payments can now be clearly associated to the goods and services exchanged through their entire lifecycle. This association can greatly simplify the possibility of automation of reconciliation efforts done by accounts payable and receivable teams.

It is important to note that the modernization efforts led by Payments Canada will also support the benefits from ISO 20022 beyond Lynx. Although the daily value settled within Lynx is quite impressive, Lynx represents a small volume of the payment activity in Canada. As Payments Canada focuses more on the modernization efforts of their retail payments, the benefits from ISO 20022 will become exponentially accessible to everyone.

This will ensure that Canada’s payment infrastructure will remain in line with other countries, not only from a technological standpoint, but also from a legislative one.

What are some of the benefits that you see for the Bank of Canada, in being able to send and receive ISO-enabled payments at the launch of Release Two?

We expect the benefits to be realized quickly with our international clients who are quite active in the payment space. We are expecting them to quickly adopt the MX standards. We will also benefit from the richer remittance information over time as we refresh our systems to fully leverage the potential from ISO 20022.

As we’re aligning with Payments Canada, the Bank is also planning on enhancing its internal ecosystem with a global and open standard foundation to harmonize other message formats for cross-border operations, which will ultimately improve efficiency in our processes while reducing the cost to all internal business lines.

In your roles at Bank of Canada, you have witnessed a great deal of change in payments. What are you most excited about for the future of payments?

The world of payments has always been an interesting one, at least to some of us! While the concepts of debits and credits are not changing, the mechanics of making payments is evolving quite fast. It does not mean we all need to jump to the next business model at the same time, but we can clearly see a greater interest in the innovation space. This is true both at the wholesale and retail levels.

We also see a growing interest in issues such as cross-border payments, the introduction of new types of direct participants in the various payment systems, the desire for a harmonization of standards across jurisdictions, the impacts from the introduction of central bank digital currencies, stablecoins, and decentralized finance.

The vision set out by Payments Canada in 2016, which was greatly supported by various forums, including the Bank, is being gradually delivered in the retail and wholesale payment space. This will result in an all-encompassing innovative payment space and make this vision a reality.

Release Two of Lynx is a step forward in the promotion of the adoption of the ISO 20022 standards in Canada. The upcoming launch of the Real-Time Rail, Canada’s new real-time payment system, should be an even greater step in this direction.

We are honored to be a part of the transformation of the payment space and have the privilege to work alongside numerous teams of experts across the Canadian and international payment industry.

*This article was originally published in Financial IT’s Special Sibos 2022 issue on October 10, 2022. For more information about Financial IT, please visit financialit.net. An interview with Mike...
Learn more

Alex Kade, Industry Lead, SWIFT, Analytics and Cyber, TD Payment Operations at TD Bank shares how he and his team are working with Payments Canada and the broader payment ecosystem to bring Lynx...
Learn more

Payments Canada uses the SWIFT network for the transmission of payment messages to and from Lynx participants. SWIFT, or the Society of Worldwide Interbank Financial Telecommunication, is the global...
Learn more

Subscribe to one or more of our newsletters and events to connect and stay informed.